SunTech’s goal was to raise a total of 500 pounds for this year’s donation but employees’ of the company had larger aspirations with a friendly competition that ran amongst seven internal teams consisting of approximately 11 employees per team. 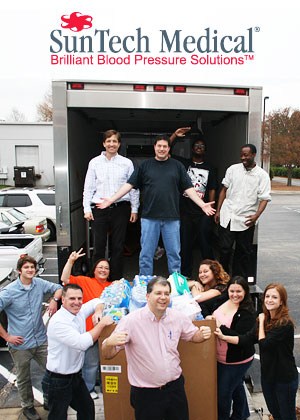 Dana Gillon, IT Director and member of SunTech’s internal activities team sums it up, “I think it says a lot about the generosity, competitiveness, and heart of SunTech.  I know a lot of people in need will be very grateful.”  The Food Bank estimates that SunTech Medical’s donation will provide over 5000 meals for families in North Carolina.

If you are interested in donating or learning more about the Food Bank of Central and Eastern North Carolina, please visit their website at http://www.foodbankcenc.org.

About the Food Bank of Central and Eastern North Carolina

Established in 1980, the Food Bank of Central & Eastern North Carolina is a nonprofit organization that has provided food for people at risk of hunger in 34 counties in central and eastern North Carolina for over 30 years. The Food Bank serves a network of more than 800 partner agencies such as soup kitchens, food pantries, shelters, and programs for children and adults through warehouses in Durham, Greenville, New Bern, Raleigh, the Sandhills (Southern Pines) and Wilmington. In fiscal year 2010-11, the Food Bank distributed more than 42.7 million pounds of food and non-food essentials through these agencies.

Sadly, hunger remains a serious problem in central and eastern North Carolina. In these counties, more than 500,000 struggle each day to provide enough food for their families. Nearly 29 percent of the people served by the Food Bank’s network are children, and another 8 percent are elderly. Thirty percent of the families served  are the “working poor” people who work hard and still have to choose between eating and other basic necessities such as medicine and housing.

SunTech has moved! Our new address is 5827 S Miami Blvd, Suite 100, Morrisville, NC, 27560-8394 USA
Learn More
We use cookies
Cookies are small text files that are downloaded onto your device when accessing this website and may entail sharing of data with 3rd parties. SunTech's cookies can be categorized as Required (necessary for the website to function properly, such as providing secure log-in or remember your preferences), Analytical (collect statistical usage data for website optimization) and/or Targeted Advertising (track your activity to deliver marketing content tailored to your interests, within and beyond SunTech websites). Click “ACCEPT” to agree to our terms and allow cookies or click “DENY" to refuse. If you choose "DENY" you may still access portions of this site, however, some functionality will not work.
ACCEPT DENY
More information on our privacy policy here: https://www.suntechmed.com/privacy